Doug and Jacqui Sweet began work­ing in the paper indus­try in 1974 at Clark & Vic­ario, who was well known as the leader in the design and sales of paper machine vac­uum sys­tems, as well as the orig­i­na­tor of the Dec­u­la­tor stock deaer­a­tion process. Clark & Vic­ario was the largest rep­re­sen­ta­tive for Nash Vac­uum Pumps in the world. After grad­u­at­ing from the Uni­ver­sity of South Florida, Col­lege of Engi­neer­ing in 1977, they moved to a Proc­ter & Gam­ble tissue mill in Albany, Geor­gia and returned to Clark & Vic­ario a few years later. Relo­cat­ing to Alabama in 1983 allowed Doug to work with many mills in the South­east, plus becom­ing involved in many new paper­ ma­chine and rebuild projects due to close prox­im­ity of sev­eral large engi­neer­ing firms in Birm­ing­ham and Atlanta. By the mid 1990’s, he was sales man­ager for Nash’s North Amer­i­can paper industry.

In 2001 Doug and Jacqui decided to begin a new adven­ture. Doug Sweet & Asso­ciates, Inc. was formed and incor­po­rated as a con­sult­ing firm spe­cial­iz­ing in vac­uum sys­tem opti­miza­tion, design, and process trou­bleshoot­ing. By 2005, energy sav­ings was real­ized as an impor­tant by-product of the opti­miza­tion process. Now, energy reduc­tion has become the rea­son for ini­ti­at­ing about half of the sys­tem stud­ies per­formed. Dur­ing 2006, vac­uum gauges were added as a prod­uct line to com­pli­ment tech­ni­cal ser­vices.

Following a full study of a 254” (6.45 m) kraft bag machine, one of the significant items noted was that couch exit solids was quite low, at about 20% consistency.  More important, was that consistency gauge data indicated suction couch contributed no more than 1% change in sheet solids.  The suction couch had two vacuum zones, and utilized one 6000 cfm (300 hp) vacuum pump per zone.  Due to a bearing failure on one of the vacuum pumps, the second vacuum zone had no pump connected during the study, because it was removed for repair.  A tri-vac preceded the couch and its operating vacuum exceeded the vacuum level at the first couch zone.  As an experiment, the vacuum pump connected to the #1 couch zone was shut off.  With no couch vacuum, the machine ran well with no measurable changes.

Previous vacuum-dewatering trials had indicated that higher flatbox vacuum could yield 23+% sheet solids.  Therefore, a project was developed to focus on increasing sheet dewatering at the vacuum elements, rather than try to determine how to improve water removal at the couch.  Since this was associated with a study to reduce energy within the paper machine and its vacuum system, the cost savings potential for operating fewer vacuum pumps was significant.

Following a review of proposals to upgrade the high vacuum table elements and coinciding modifications to the vacuum system, decisions were made to proceed with the project.  The existing flatbox system consisted of two, 8-slot flatboxes followed by a tri-vac with each zone containing 6 slots.  These connected to a vacuum source including one 2000 cfm and three 4000 cfm vacuum pumps.  A small amount of vacuum capacity was bled from the system to the low-vac elements (vacuum foils).  Total vacuum capacity for the former was 26,000 cfm with 1275 connected motor horsepower.

The reconfigured system is as follows:

Earlier vacuum trials provided a confidence level that higher flatbox vacuum would allow improved sheet solids to the press.  Removing suction zones was justified since the couch was doing almost nothing toward water removal.  Trials with no vacuum on the couch also showed that this did not negatively impact driving the fabric.  This fourdrinier also has a wire turning roll.

Vacuum capacity for each of the remaining three high vacuum zones were adjusted to progressively increase the vacuum factors and expected vacuum levels.  The final vacuum zone before the press was the new #2 zone, of the new duo-vac (Figure 1& 2).  This was designed for a high vacuum level and high vacuum capacity, with only five (5), ½” slots.  One of the previous 6000 cfm couch pumps would connect to this.  The new duo-vac was to be supplied with a new vacuum separator to handle the higher vacuum airflows.  The flatbox and tri-vac removed from the table are shown below, sitting on the operating floor. (Figure 3).

The project received a lot of attention because of the significant energy savings and potential up-side with less sheet water into the press.  Additionally, the local electric utility was supporting the project with a portion of the cost. 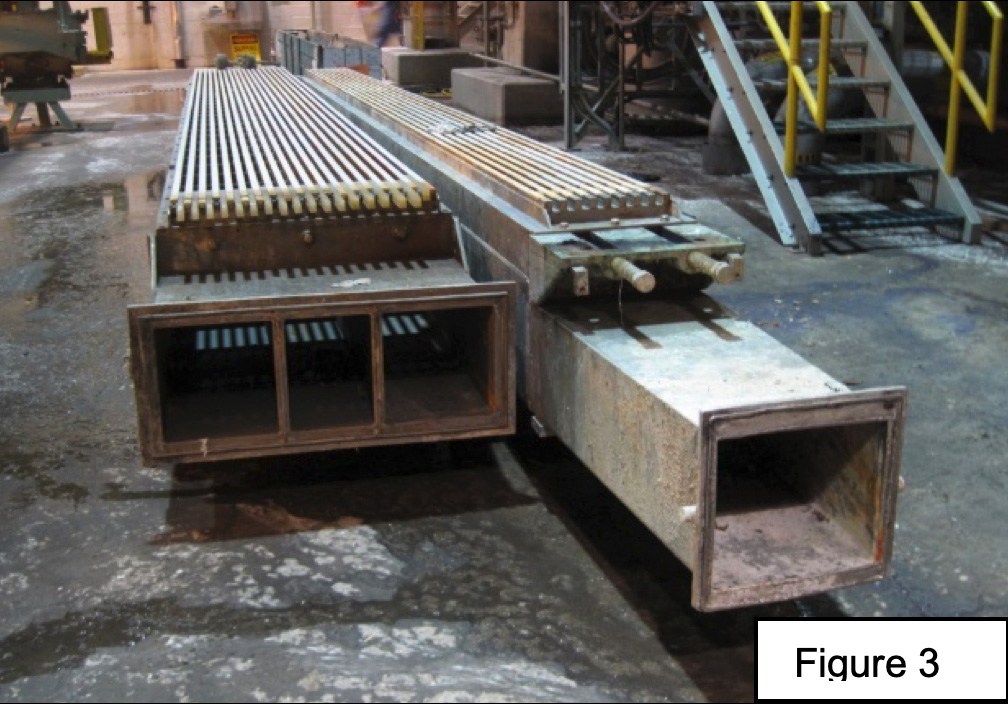 Following successful design, construction and installation of equipment, and new piping, the paper machine started up and was allowed to get production leveled out for about a day.  Then, trials began with adjusting all table vacuum elements to provide graduated and more aggressive vacuum levels, at the three high vacuum zones (flatbox and duo-vac).  Following several steps to gradually increase vacuum levels and measuring sheet solids after each change, exit solids eventually reached 28%.  The system was allowed to continue to operate at these settings.  Successive measurements of couch solids typically indicated 26+%.  During these trials, table drive power was measured and there was almost no change between the initial and final trial with low and high vacuum. 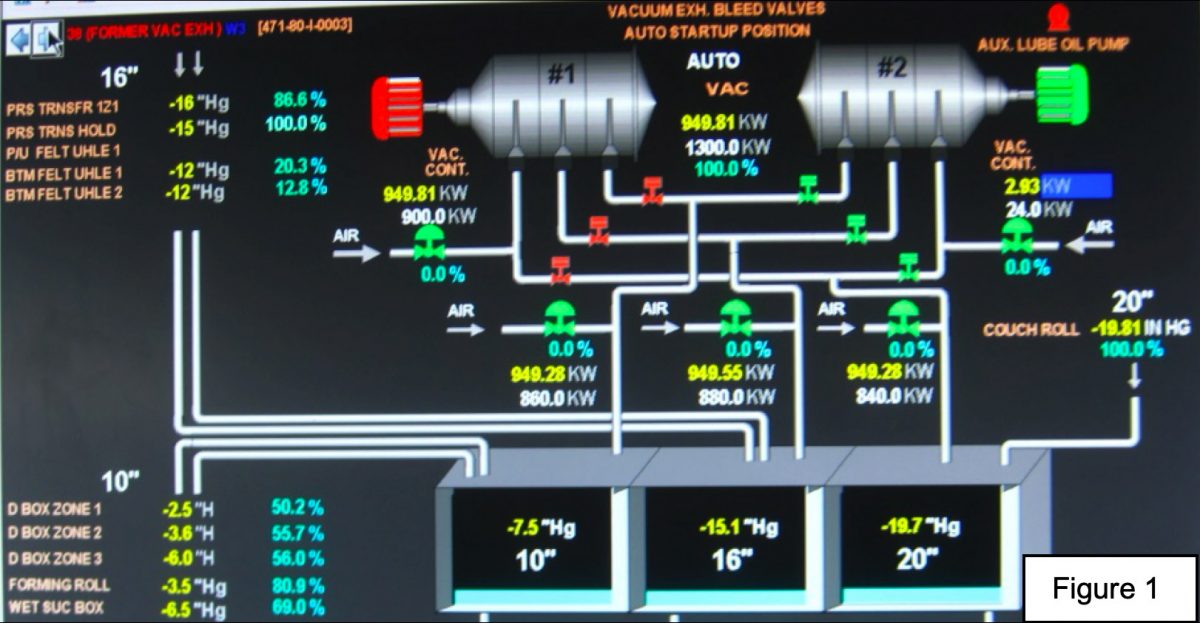 This 375” wide (9.5m), gap former machine was originally installed with a vacuum system consisting of two 1750 hp, multi-stage centrifugal exhausters.  The machine produces printing and writing paper at up to 4000 fpm.  During the next 25 years there were two rebuilds of the former and press, with each rebuild adding at least one vacuum pump.  The vacuum system was studied in 2010 and several opportunities were presented where the vacuum system could be reconfigured to redistribute vacuum capacity and correct some design problems with vacuum control. 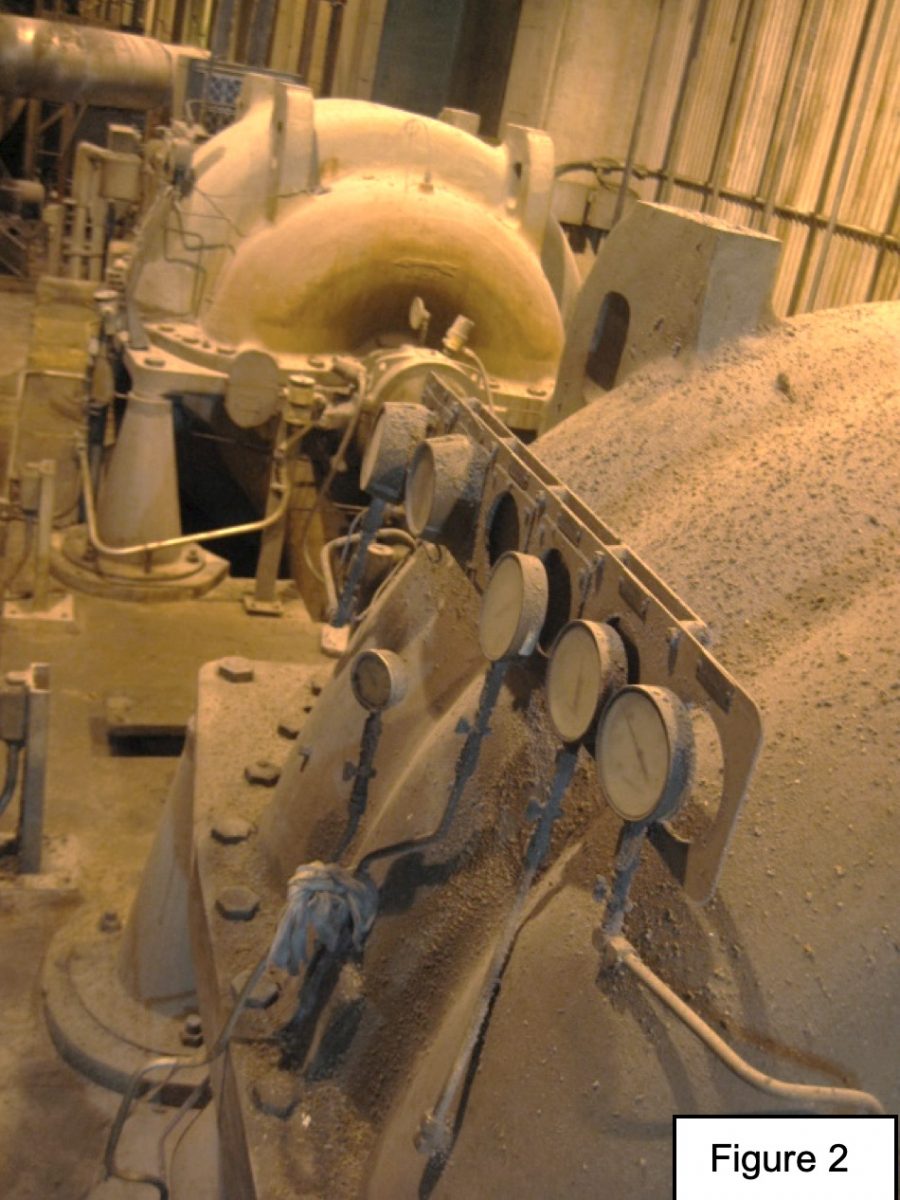 There were several positive opportunities available and a plan was developed to make piping and vacuum control modifications during the following 2 ½ years.  This resulted in being able to shut down one of the two centrifugal exhausters and the largest of three vacuum pumps.  The screen shot from the DCS (Figure 1) shows the right-hand exhauster not operating.  Production rates were not affected.  Project costs were about US$600,000 with an annual saving of about US$500,000. Figure 2 shows the two multi-stage exhausters, where one is now idle as an installed spare.

Results Summary:  1 vacuum exhauster and one vacuum pump removed from operation, saving 1600 hp (1200 kW).  This was a 40% reduction from the original operating power.

A vacuum survey was conducted of a 202” Dominion pulp dryer, which was built in 1964.  This study was to precede a project to yield increased production and double felting of the 1st and 3rd presses.  While reviewing dewatering on the table, effective low and high vacuum elements and good vacuum control provided reasonable sheet solids at 24 – 25% before the couch.  Couch exit solids was below 28%, and could be improved.

The suction couch had two vacuum zones which were connected to a single vacuum header that was piped to three vacuum pumps (Figure 1).  Operating vacuum was 15” Hg at both zones.  The 2-zone couch roll was intended to have low vacuum, at the initial zone, of around 10” Hg and high vacuum, at the second zone, with a target of 20” Hg.  Over time the system had evolved into a common vacuum source for both couch zones, and the flatboxes, resulting in lower maximum couch vacuum. 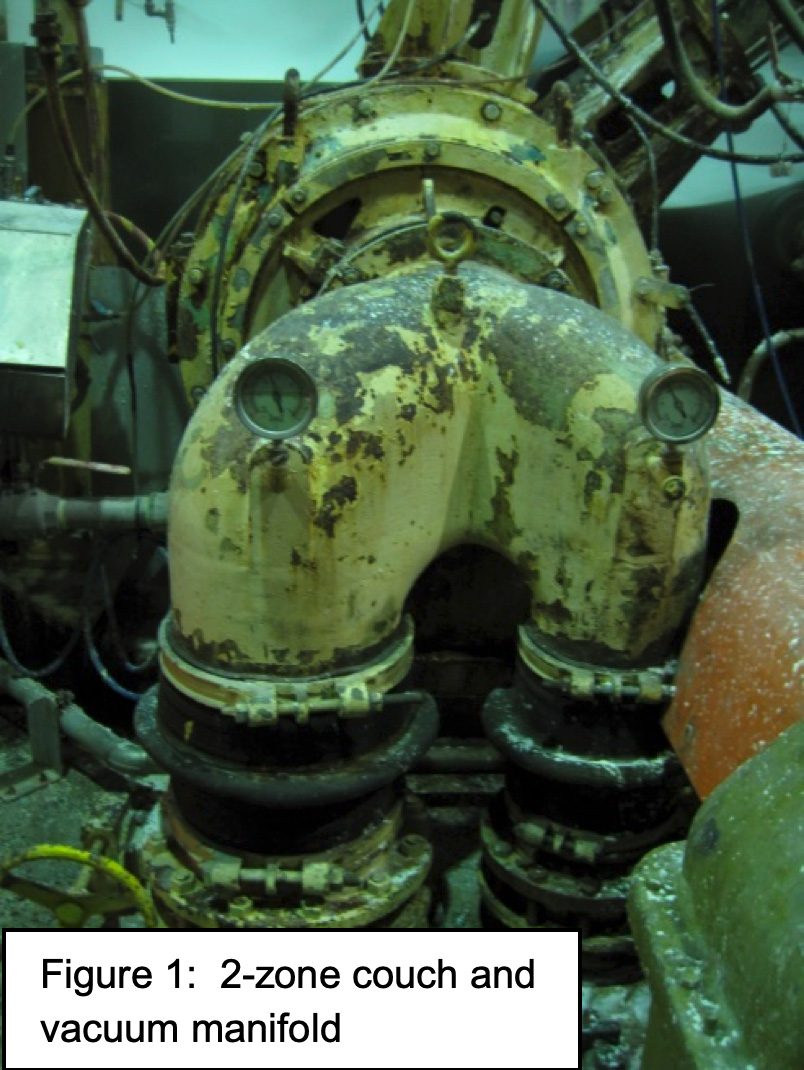 The flatbox system had more than adequate vacuum capacity and provided 12 – 15” Hg at the last three flatboxes. Rather than propose changing piping to segregate vacuum supply to all three elements, the recommendation was to not use any vacuum at the first couch zone, and to only separate the vacuum source for the flatboxes and second couch zones.

The couch had two small diameter lumpbreaker rolls, with one at each suction zone.  Higher vacuum is necessary to remove any more water at the couch.  During a trial, the first zone was disconnected from the vacuum system and the first lumpbreaker was raised.  This was successful and increased vacuum at the second couch zone.

The rebuild progressed into a successful project with excellent results.  The vacuum system was upgraded to replace six original 6000 cfm pumps with five 5000 cfm and one 6000 cfm pump.  This was 14% smaller than the original vacuum system, even though two more uhle boxes were added for the two new top felts.  Less vacuum capacity at five of the six pumps was acceptable, based on successful trials and not attempting to add “safety factors” to an existing good design.  Before and after photos show the 1964 vintage and 2011 model vacuum pumps (Figures 2 & 3).  Note, the new vacuum system was designed to utilize three existing 600 hp motors, gear reducers, and foundations from the old system, with pumps being driven in tandem.  Most of the existing vacuum piping was used with the new pumps due to their similar inlet and outlet configurations.

The local electric utility, BC Hydro, participated in financing the project due to significant energy savings provided by six new and more efficient pumps.  BC Hydro’s Power Smart program literally put their money where their mouth was by providing a check for CAN$1.1 million in a ceremony at the mill.  Energy savings with the new vacuum pumps was 3.7 gigawatt hours per year.